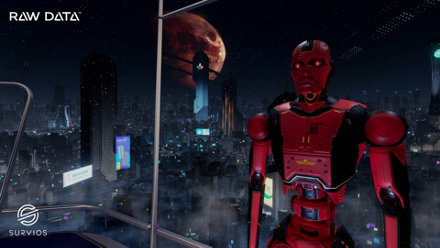 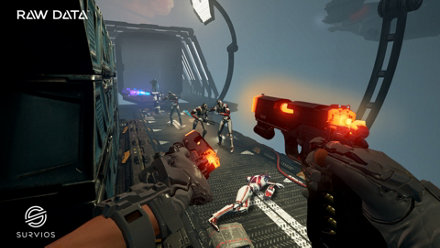 The massive and seemingly benevolent Eden Corporation owns the world. The elite hacker resistance movement SyndiK8 has unearthed the sinister reality behind Eden Corp’s newest line of robotic products. As one of SyndiK8’s elite operatives, your mission is straightforward: infiltrate Eden Tower, steal as much Raw Data as possible, and get out alive—bringing Eden Corp down in your wake.

However, as the secrets behind Chairman Shiro’s new “Promotion” program become clear, the reality gets much more complicated. Does it really grant immortality? What is Eden truly collecting? It seems that Eden’s corporate veneer may be just a thin facade for something much, much worse.

Built from the ground up for virtual reality, Raw Data’s action combat gameplay, intuitive controls, challenging enemies, and sci-fi atmosphere will completely immerse you within the surreal environments of Eden Corp. Become the adrenaline-charged hero of your own futuristic technothriller as you put your wits, boldness, and endurance to the test.

Active VR gameplay turns you into a controller, with instant reflex access to an arsenal of advanced weapons and cutting-edge nanotech powers. Shared spaces with avatars and motion tracking encourage players to physically communicate through body language and environment interaction.

Starting From $ 3.99 per Day
Available Partially Reserved Not Available (for the whole day, check hourly availability)

Select a Pickup and Drop Off Date